The following article was written for Rabbiting On magazine (Summer 2019)

Why do owners give up their pet rabbits?

Sadly, like all rabbit rescues we have never been in a position to offer spaces to the huge numbers of unwanted rabbits we are asked to help. This can be hard to accept as a rescue owner. Many more rabbits are being given up by their owners in the UK than there are rescue spaces available.

Over the past 4 years (2015-2019) we have kept records of all of the rabbits we have been asked directly for help with. In previous years we had unfortunately only kept complete records of the rabbits which we were able to take in. During this 4-year period we were asked to take in 2,385 unwanted rabbits. Sadly, we were only in a position to offer spaces to less than a quarter of these.

The main reasons for owner’s contacting us to give up their pet rabbits during 2015 to 2019 were as follows: 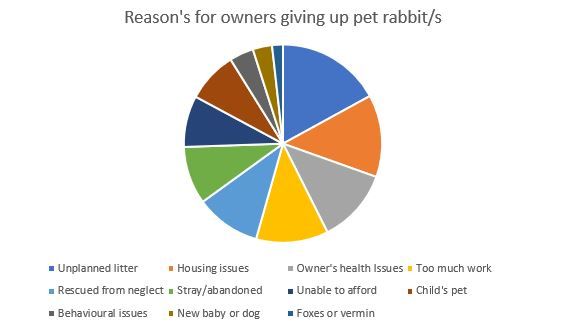 Housing issues were also quoted in surrender enquiries time and time again. These included emergency situations with owners finding themselves in very genuine need of help and support including owners facing house evictions, or fleeing domestic abuse. Other owners were needing a new home for their rabbits due to relocating abroad (in some cases to countries where pet rabbits were not permitted).

Mostly these owners were looking to give up their rabbits due to issues with rental permissions. Some very genuine owners were experiencing unexpected changes in circumstances. Many others had taken on pet rabbits knowing that they were not permitted at their property. Such as students in halls of residences. In many cases owners had taken on pet rabbits where it would be foreseeable that housing issues would likely arise over the course of the rabbit’s lifespan (up to 12 years).

Rescue centres assist owners (and their families) during very genuine and sometimes very sad situations in which owners have become too unwell (physically or mentally) to care for their pet rabbits. Or where an owner has passed away. It can be very humbling to be able to provide support to people and their animals in these circumstances. Many rescue workers will no doubt feel as we do that this is where our resources would ideally be able to be directed.

The most common single health issue given by owners wishing to give up a pet rabbits was the existence/development of an allergy by either the owner or a family member (to the rabbit itself or to hay.)

Many owners claimed to be unable to cope with the on-going care of their rabbits around their work/family commitments etc.

Urgent situations in which the welfare of multiple rabbits may be severely compromised are often brought to the attention of rescue shelters. These extreme and often very distressing situations can arise as a result of cruelty (rabbits rescued from dog baiters etc.) Or in other cases the causes can be complicated and delicate such as those in which mental health issues may be a factor (such as animal hoarding).

Many rabbits enter rescue centres having been found by members of the public. In cases where rabbits are found dumped in boxes, or left behind at vacated properties it is clear that the rabbits have intentionally been abandoned. For the remainder we cannot be sure whether owners have released their unwanted rabbits to fend for themselves (which domestic rabbits are ill equipped to do). Or whether these rabbits have escaped (possibly due to being inadequately housed.)

A high number of owners seek to re-home their rabbits due to the expense of their general upkeep and/or veterinary care. This can be due to unexpected changes in circumstances. However, more frequently this doesn’t appear to be the case.

Rabbits becoming unwanted after developing health issues and as such requiring expensive veterinary care is not uncommon. Rabbits are delicate animals and sadly succumb to a wide variety of complex health issues. Neglect, or a gross misunderstanding of their correct welfare needs is often a contributing factor. In addition, many pet rabbits are being bred predisposed to developing health issues. As a charity currently specialising in helping rabbits in rescue with additional care needs we find ourselves being asked to help specific breeds of rabbits with extreme in-bred characteristics time and time again. We experience a relatively high incidence of stray/dumped rabbits joining us in clear need of veterinary attention (i.e. hugely overgrown incisors).

Modern welfare organisations are mostly in agreement that the common perception of rabbits as cheap, easy pets for children is a myth, or at least it is if the welfare needs of the pet rabbits are being properly met. Despite this, many parents are still buying rabbits for their children (often on impulse) seemingly very poorly informed on how to properly meet their welfare needs.

Additional reasons for owners wishing to give up rabbits were;

Behavioural issues; including rabbits escaping, being aggressive, untame or destructive, or not successfully bonding with other rabbits in household – 89 rabbits (4%) 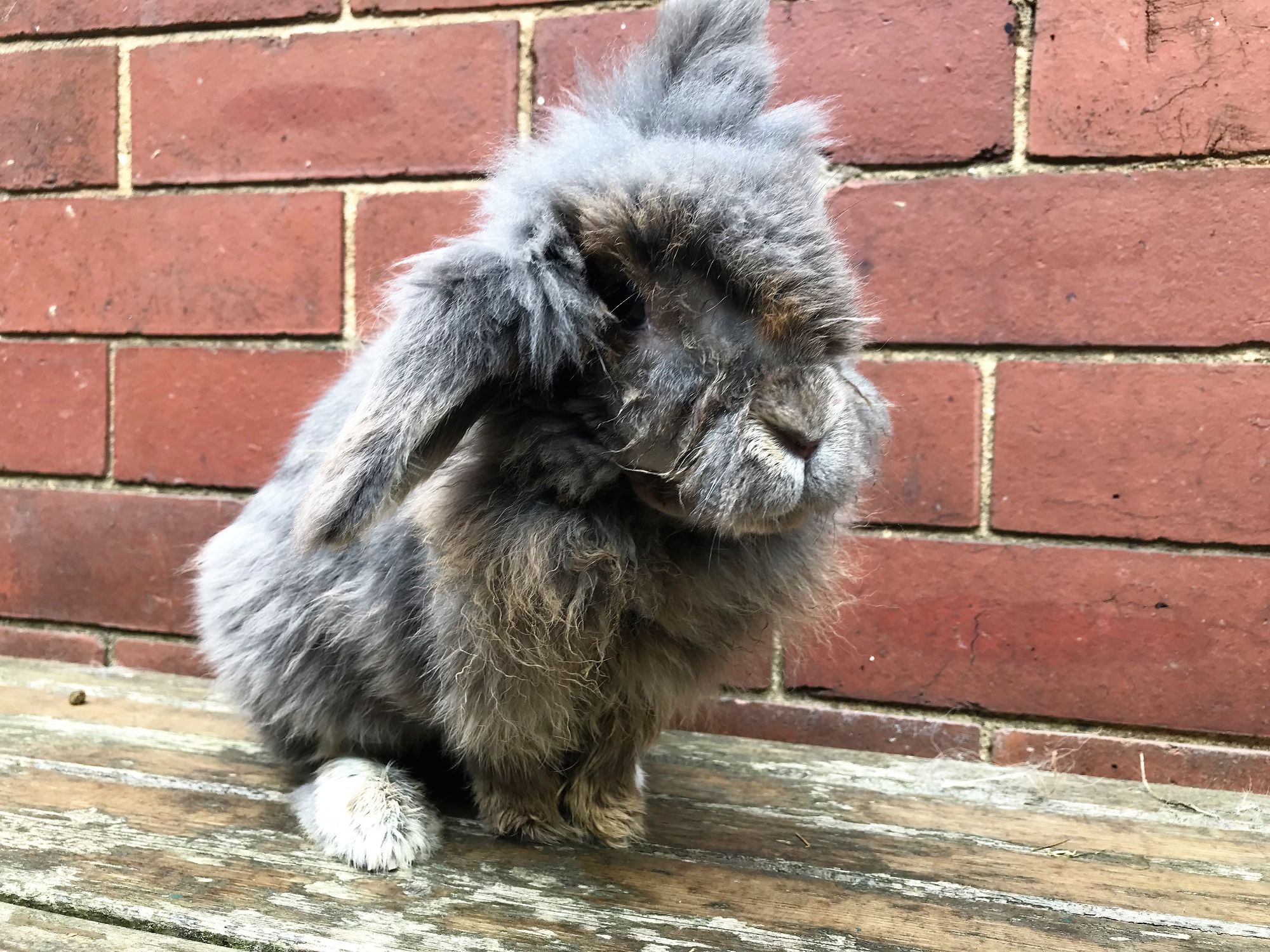 The above suggests to us that many people are taking on rabbits without being well enough informed with regards to the commitment (financial, time, practical) needed to properly meet their welfare needs for their potential 12-year lifespan. Nor are they taking seriously their legal obligation to ensure these welfare needs are being properly met (Animal Welfare Act 2006). A large proportion of rabbit surrenders could potentially be avoided if owners were much better informed prior to taking on pet rabbits, and took the responsibility of committing to such a complex, potentially expensive and time consuming, relatively long-lived pet more seriously.

Many of our Camp Nibble rescue rabbits have been given up several times prior to joining us. Ease of/ the low cost of purchase, and perceived lower sentience (compared with say cats and dogs) we believe contribute to large numbers of pet rabbits becoming unwanted and given up.

“Regretfully we bought these rabbits from a recommended breeder. We were assured they were both males. One day we were surprised to find four bunnies….Sadly we haven't the income to pay for either spaying or castration. They now share a two-tier hutch that has been split. My children lead very busy lives and just don't have the time to give these rabbits what they deserve. They are now scared when we enter their hutch.” A quote from a Camp Nibble online surrender form enquiry from an anonymous owner wishing to give up their rabbits. 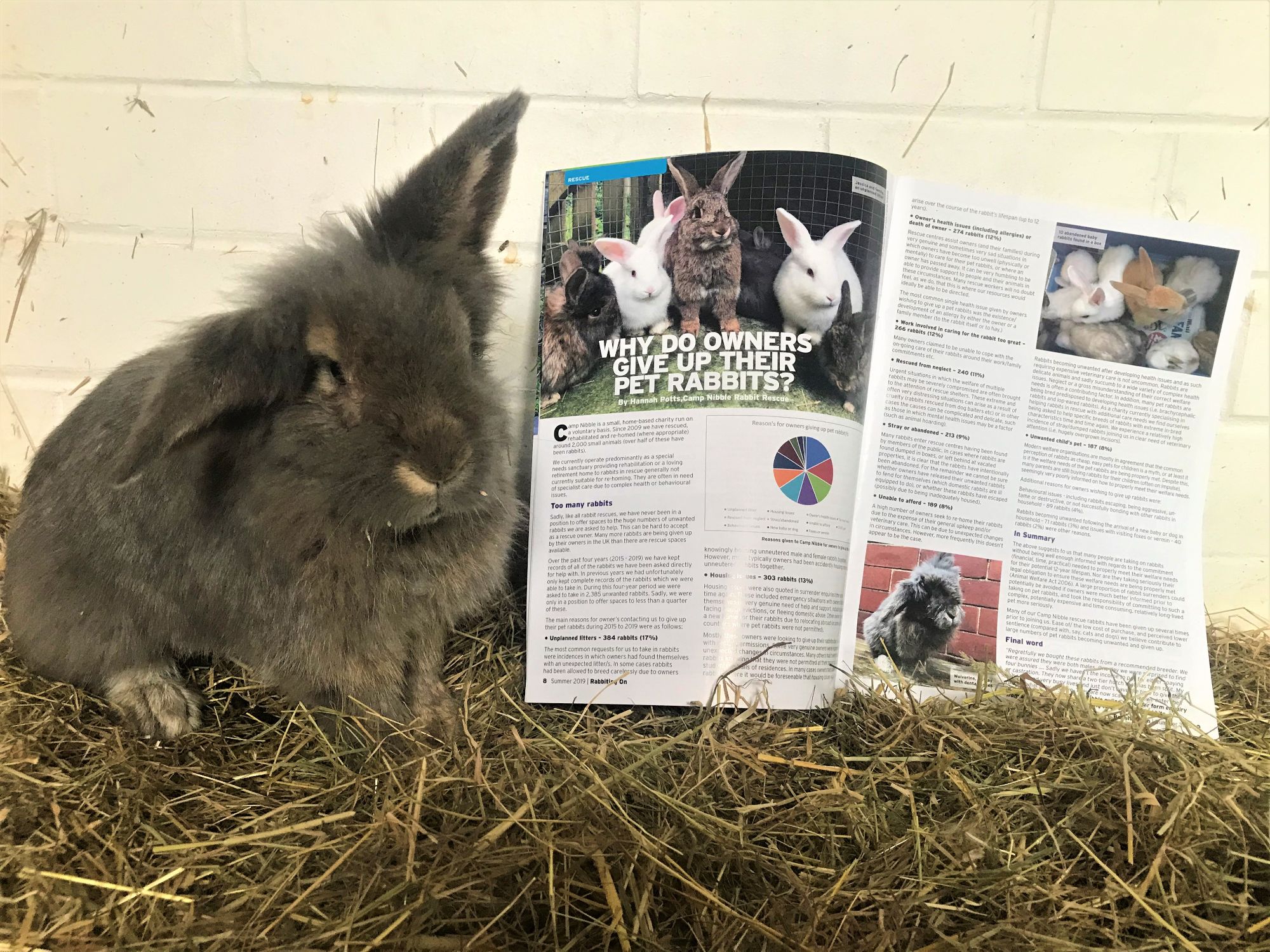