RWAF press release - Abandoned rabbits - It's worse than we thought

Abandoned rabbits - it's worse than we thought 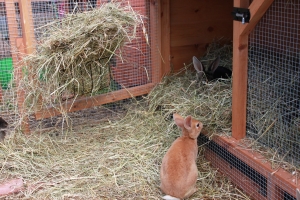 The last meaningful survey conducted by the charity estimated the number of rabbits given up to rescue shelters at around 35,000. The organisation has recently conducted another survey, and was shocked to find the figure now standing at well over 67,000.

"What is really worrying," said Richard Saunders, RWAF Veterinary Expert Advisor, "is that this number only reflects the cases where the rabbits have made it into rescue. We can't possibly quantify how many more are dumped in the wild and left to fend for themselves, which leads to almost certain death, by the way. Then there are those who, when the novelty has worn off, are simply neglected and left often in a hutch with no access to exercise space and almost no attention except for a handful of food now and again."

The charity also points out that countless unwanted pet rabbits are sold for next to nothing through classified ads both in newspapers and online as well as at livestock auctions. It is understood that many of these are bought as meat.

In the survey, almost all the rescues said that the problem is getting worse, with more and more people wanting to rehome their pet rabbits. Many said they are only able to take in around 10% of the requests they receive, with most having waiting lists of 2-6 months. Many owners will not wait that long, and take their own steps to dispose of the animal.

The answer? Well the charity's message is simple on this one. Rabbits are not the cheap and easy children's pet that they are often mistaken as being. They are as big a commitment as a cat or dog, and people should think long and hard, and do their research before taking them on. And even longer and harder before they decide to breed 'just one litter' from their pets, all of which will then need to find homes. If you can't commit to providing rabbits with the space, companionship, vet care and proper diet for ten years or more, then rabbits are not for you.

For more information on caring for rabbits please go to http://www.rabbitwelfare.co.uk