A sad goodbye to Bernadette

A very sad day as we have had to say goodbye to Bernadette one of our much loved sanctuary bunnies. Bernadette was found two years ago in someone's garden by their pet dog! Luckily she was found by a caring household who were able to keep her safe until they found a rescue space for her.

She had clearly been much neglected in her original home. She arrived grotesquely overweight and unable to clean and take care of herself. We suspect that she has been abandoned to fend for herself after becoming horribly dirty and smelly! Bernadette needed lots of TLC to bring her back to good health and down to a healthy weight.

Despite us successfully rehabilitating Bernadette the right home for her did not come along. Sadly, she then developed subsequent serious health problems. She had suspected cancer, and had been diagnosed with serious spinal problems which were very likely to be as a direct result of the neglect that she experienced for several years before joining us.

Bernadette enjoyed a happy retirement with us and became a very special part of the Camp Nibble family. Sadly, her health deteriorated very suddenly and on our vet’s advice we have had to make the horrible decision to have her put to sleep.

Thank you very much to the very kind people who have sponsored Bernadette during her time with us. 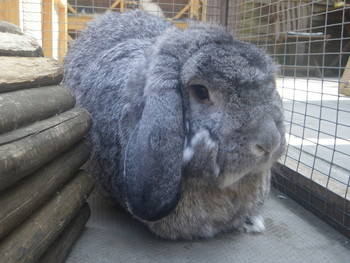