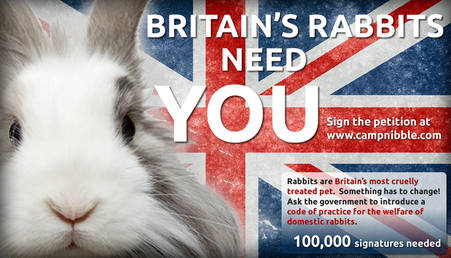 Animal rescue charity Camp Nibble is urging the government to introduce a code of practice for the welfare of domestic rabbits. The charity based in West Yorkshire believes the UK to be in the midst of a serious rabbit welfare crisis. Despite the charity opening its doors to many types of small animal consistently around 80% of their residents are rabbits.

They are not alone in reaching this conclusion. Recent studies by the RSPCA and PDSA have identified rabbits to be the most neglected and cruelly treated pet in the UK. In their November 2012 press release the Rabbit Welfare Association and Fund (RWAF) the UK’s leading authority on rabbit welfare revealed that around 67,000 unwanted rabbits passed through UK rescue shelters each year. The numbers that do not successfully make it into rescue shelters is almost certainly several times this amount.

“Most of our rescue rabbits one way or another have ended up at Camp Nibble due to people taking on rabbits with little realisation of what is needed for them to live happy, healthy lives. They are widely misunderstood animals and are very often mistakenly taken on as cheap, easy pets. In many cases the responsibility for their care is even left in the hands of children. As intelligent, sensitive animals that can live in excess of ten years it is clear that something has to change” said Hannah Potts Camp Nibble trustee.

There is an obvious gap between the general public’s traditional view of pet rabbit keeping and the modern day view held by welfare organisations and the rabbit welfare community. The issues surrounding the current rabbit welfare crisis in the UK are complicated and there is sadly no quick fix. However, Camp Nibble believe that the first important step forwards is for the government to introduce a code of practice for the welfare of domestic rabbits. Codes of practice currently exist for the welfare of dogs and cats. These documents compiled by experts outline in detail what is needed for these animals to be correctly cared for, and what owners need to provide in order to comply with the Animal Welfare Act 2006. These codes of practice also help the courts decide when an animal welfare offence has been committed. Wales introduced a code of practice for rabbits in 2009, the rest of the UK needs to follow their lead.

Camp Nibble is asking all UK animal lovers to join in urging the government to introduce a code of practice for the welfare of domestic rabbits by signing and sharing their important government e-petition. Any government e-petition that obtains over 100,000 signatures in one year is considered for debate in the House of Commons. Their e-petition is proving a very successful vehicle for raising awareness of rabbit welfare issues. They hope that it will show the legislators a public strength of feeling towards beginning to address the current rabbit welfare crisis. To sign the e-petition and to find out more about Camp Nibble's work please visit campnibble.com

Camp Nibble is a Rabbit & Rodent rescue shelter based in Leeds, West Yorkshire.