Leona joined us along with her two brothers Mikey and Donny who have since found a home. They were a surprise arrival after their original owner bought a guinea pig that she did not realise was pregnant from a pet shop. Unfortunately, these babies were then incorrectly sexed by a vet and Leona also became pregnant and had a litter of four lovely boys! As a result the family were then left with many more guinea pigs than they had bargained for.

Despite Leona's owner separating her from her brothers as soon as she discovered the vet's mistake and the four babies it was too late and she was already pregnant again! As result she has given birth to a second litter of four beautiful babies since joining us.

This is a very good example of how quickly small animals can multiply when irresponsibly kept in mixed sex groups or incorrectly sexed.

Please make sure that your pets are correctly sexed, or neutered if appropriate. 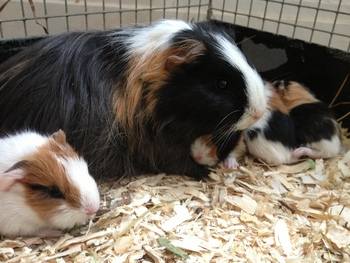