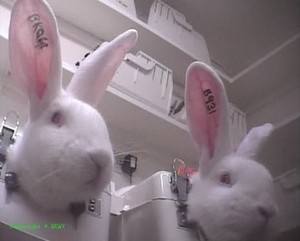 At this time of year when we think of Easter bunnies, the BUAV is raising awareness of the cruel use of rabbits in research.  In the UK, over 10,000 rabbits are experimented on and killed each year[1]. Over 6,000 of these are used in fundamental and applied research and are used in such areas as heart disease, HIV, reconstructive surgery, and asthma. This research is often very invasive and the rabbits can suffer substantially from being subjected to major surgery, damaged arteries, metal implants and nerve and bone grafts.  Much of the research represents one-off speculative attempts to create an ‘animal model’ of a human disease that rabbits would not normally suffer from. Some of these ’animal models’ have been heavily criticised[2] and yet researchers continue to use rabbits.

Rabbits also continue to be used in toxicity (poisoning) tests for drugs, agricultural and industrial chemicals and food additives. In 2010 in the UK over 1,000 pregnant rabbits were subjected to toxicity (poisoning) tests to examine the effects on their unborn babies.  513 rabbits had chemicals dripped into their eyes and 625 had chemicals rubbed into their shaved skin in the cruel Draize tests which are still licenced despite the presence of alternative methods. 5,618 pyrogenicity tests were conducted on over 1,000 rabbits. A recent BUAV investigation at a UK contract testing facility, Wickham Laboratories, graphically exposed the suffering inflicted on these sensitive animals during these cruel and archaic tests - rabbits can be starved of food for up to 30 hours and then restrained by their necks in “stocks” for at least six hours and injected with the test substance into an ear vein. Their temperature is recorded using a thermometer inserted as much as 7.5cm into their rectum.

Rabbits are experimented on in contract testing laboratories and universities. Here are some very recent examples of the type of research they are subjected to:

-          26 rabbits were forced to eat a high-cholesterol diet before being subjected to surgery in which a tube was inserted into an artery in their neck. The tube was then inflated and a device placed around the injured part of the artery to administer a drug.  The animals were killed at the end of the experiment study and their arteries were dissected for examination. Six of the rabbits had so badly thickened arteries that the researchers had to exclude them from the study.

-           Forty rabbits were used in facial surgical experiments.  During surgery, muscle was removed from their thighs and connected to one of two nerves in the right side of their faces. Nine months later, their facial scars were re-opened and the thigh muscle attached to a metal frame which in turn was linked to a computer. Electricity was applied to stimulate the nerve grafts and measure their activity. The rabbits were killed and their nerves were dissected.

-          One day old rabbits were injected into their stomachs with a fungi extract known to cause allergies and lung inflammation. The baby rabbits were repeatedly injected with this allergen every 2 weeks until they were 13 weeks old. Under anaesthesia the rabbits were forced to inhale the fungi to mimic an asthma attack. A balloon ended tube was inserted down their throat to measure lung pressure. After the lung tests, a skin test was also performed where the antigen was injected into their skin to check for an allergic reaction. In order to make the skin reaction more visible, a blue dye was injected into the ear vein of the rabbits through an implanted tube in their ear. The rabbits were then killed and skin of their backs removed for analysis.

-          Titanium was implanted into the heads of 24 rabbits in an attempt to see if a certain type of implant would help bone regrowth with osteoporosis.  In order to induce osteoporosis in the rabbits, their ovaries were surgically removed and they were fed a calcium-deficient diet. Six weeks later, they were subjected to surgery in which their skin was cut away and skull exposed. Holes were drilled into either side of their skull and two types of titanium domes screwed into place. The skin was then sewn back into place. The rabbits were killed either 30 or 120 days later and their skulls were removed for examination.

Dr Katy Taylor, BUAV’s Senior Science Adviser stated: “It is unacceptable that thousands of rabbits continue to be used each year in UK laboratories in tests which often fail to mimic complicated human disease and illness. We urge people to spare a thought for bunnies this Easter.”

2. Use of the interposed nerve graft to reduce differences in functional muscle transfer outcome arising from variability in motor input. Journal of Plastic, Reconstructive & Aesthetic Surgery (2011) 64, 432-438.

3. In vivo efficacy of the antimicrobial peptide ranalexin in combination with the endopeptidase lysostaphin against wound and systemic methicillin-resistant Staphylococcus aureus (MRSA) infections. International Journal of Antimicrobial Agents (2010) 35, 559-565.

4. Airway responsiveness in an allergic rabbit model. Journal of Pharmacological and Toxicological Methods (2011) 64, 187-195.